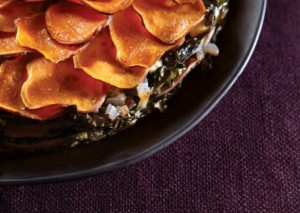 First, I’m frightfully behind in posting recipes. Apparently I’m making more than two new ones a week, so posting two a week is just getting me behind. So I’m making an effort to deal with the backlog.

Secondly, I’m trying this year to incorporate more veggies into my diet, meaning more elaborate vegetable dishes. This one comes from Vegetarian Times and was a real winner as far as we were concerned.

The week I made it, my grocery was out of swiss chard so I substituted kale instead and it worked perfectly. So I would hazard a guess than collards or mustards would too. Experiment and let me know how it turned out!

NOTES: You could of course play with the cheese here. Feta might be nice. Be careful with the salt if you use that though.